A downloadable game for Windows and macOS

Welcome to the Court of Henry VIII, Where Your Choices Decide Your Fate

The year is 1539 and you are a foreign princess thrown into the midst of the vibrant and strange court of Henry VIII. Your choices throughout the game change your relationships with the characters and influence the story. There are multiple endings. Be careful what you say! How will you fare at court? Will you find love? Will you find fortune? Will you survive to tell the tale?

This is a work of historical fiction. Some of the characters are from history and others are not. What happens in this game is an alternate reality from real history.

In order to download this game you must purchase it at or above the minimum price of $4.99 USD. You will get access to the following files:

OK. I'm not in the habit of writing reviews or comments, but this game just triggered a whirlpool of thoughts and emotions. English is not my native tongue, so I apologise for any possible mistakes or crooked language, it's a work in progress =) Overall, I think, the game is very well made.

The art style is just singular and you can really imagine how all these characters would look like irl. It's a breath of fresh air amidst anime-style visual novels, which look too much alike.
Music is nice, pleasant, not too distracting from the story and relays the atmosphere of the age.

Despite shortness of the novel, the characters are incredibly well developed. Even though a woman's life at court felt like getting in a viper's nest, where any careless move could be fatal, after the first playthrough I've realized that I really like the female cast: silly, naive Agnes and strong, cunning and surprisingly honest Margaret. And Henry is... wow... So not very sharp and full of himself. I guess a lifetime of endless flattery and everyone's hypocrisy would do that. Oh well, in the end I managed to stab Cromwell and smother the king and escape with my life. :D Though my favorite ending is where he dies naturally.

Thank you so much for the dedication to all those women, whose lives were cut short and whose stories were never told. I'm not into history, but there are a lot of novels, movies and games inspired by the Tudors era, so you end up learning bits and pieces. And it's so sad to see how men of power used to percieve women mostly as tools for establishing their families position, forging political alliances or simply producing heirs. The game relays the hopelessness of their situation vividly.

Hi Maarit - Thank you so much for your very kind and thoughtful review! It means so much to read this and hear about your experience with the game! I am thrilled that you liked it. :)

lol i smothered the king yet had positive relationships with everyone ??

I went through this but unfortunately I didn't like it. The choices are plentiful and probably meaningful, the problem is - my goal is _hard coded_ and my character wants to escape, no matter what. Maybe I got my expectations wrong but I was hoping to be able to chose goals (and so personality as well) of my character. Like - for example - that she will actually _want_ to become Queen.

I'm sorry you didn't like it, Elvira! I can understand if you don't like visual novels with predefined protagonist personalities. This game is more of an interactive narrative with various endings, and not as open-ended as some other VNs. The princess definitely has a personality haha! :P

Thanks for playing anyway!

Finished the game and I really enjoy the lack of enjoyment of being a confused princess in the setting. I can't really pick what I love most about the game, since I love all aspects of it, but I can say that most of the characters are lovable to an extent, the choices really put me in some REALLY tight spots, and the story is most enjoyable.

I felt a lot of emotions throughout the story that are unique to each characters depending on how the relationship is built, and I really love that you put how good the MC's relationship is with everyone. It gives me ideas on which ending to go for next and what I should do.

It really is an enjoyable emotional roller-coaster.

Thanks! I'm thrilled you enjoyed it. Thank you for playing! :)

I loved this game! The writing is good, i didn't any spelling errors, the music is very fitting and most important DOG LOVE! How many endings are there? I'd love to make sure i got them all.

I'm glad you liked it! There are a handful of endings and a lot of small story aspects that can change, but the exact number is a secret! :P

I just finished the game and am really impressed. Everything was so professionally done(the music and visuals). The length was perfect and felt like a really engaging movie.

I also loved the amount of choices. There were so many and I really had to think about what way I needed to speak to each individual person. That's rare in a visual novel as you typically don't feel it even matters, but I felt I needed to approach every situation differently here.

I've always been really interested in King Henry and it was pretty cool to get to play through the experience.

Is this on steam? It really should be if it isn't. It deserves a ton more exposure.

Thank you! It isn't on Steam right now, but I am considering it for the future. 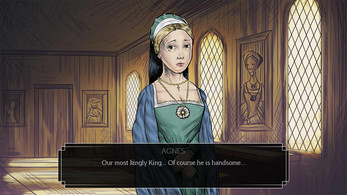 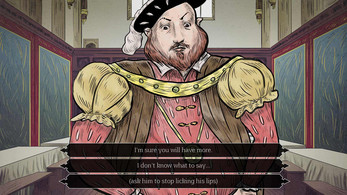 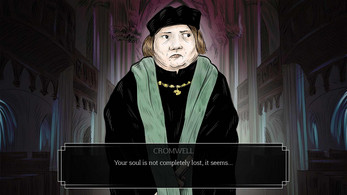 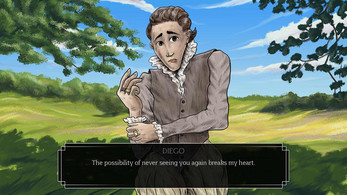 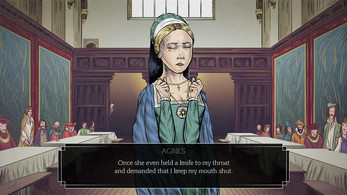